You can select the aircraft from the main menu, the left side menu, and from the bottom bar menu.

A description of the main characteristics and the required experience level is shown in the Aircraft Selection Panel. 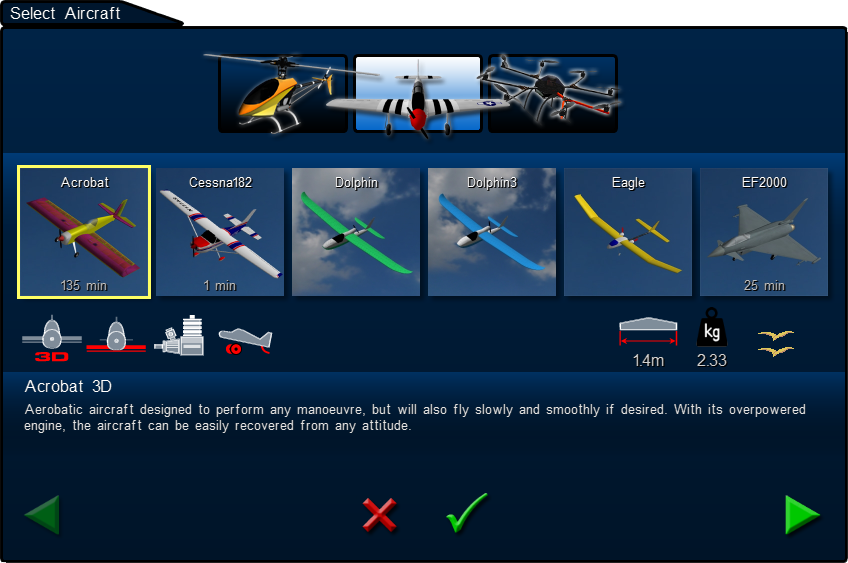 Each scenario has a predefined set of initial aircraft and camera positions P1, P2, and P3

If the aircraft is upside down after a crash, it can be turned upright from Main Menu / Aircraft / Turn Aircraft Upright

Boost the airplane Power and Manoeuvreability with a single click in the Aircraft Easy Tuning panel. 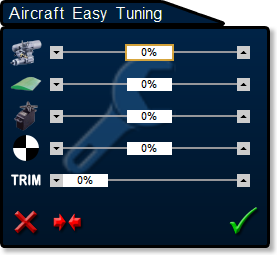 The Power of the Engine/Motor is a determining factor in the flight characteristics of an airplane.

An underpowered airplane requires careful piloting in order not to loose too much speed, since it would be difficult to recover from such situations.

However, an overpowered airplane will be able to level from any flight attitude otherwise dangerous.

With the slider control, the engine power can be reduced and increased.

With this slider, these values are changed, and therefore, manoeuvrability is increased or reduced.

Servos require a fraction of a second to travel to the commanded position. Although such delay may seem short, actually, it is significant in fast moving aircraft.

A standard servo requires approximately 0.20 seconds to travel 60 degrees. There are faster servos which improve the response of the aircraft to fast stick movements.

Use the slider to experiment with different servo speed and check the aircraft response time.

Use the slider to experiment how the airplane stability varies with different CG positions. The position of the CG can be observed graphically in the in the Aircraft Editor

The aircraft should be correctly trimmed out to fly straight and level at cruising speed. However, during the first flight of a new aircraft, the pilot must make some in-flight adjustments to the trims to counteract any unwanted drift.

Use this slider to set the out-of-trim and practise trimming.

The incorrect trimming will change with every reset of the aircraft position.

The adjustments for a particular aircraft can be set in the Aircraft Editor, in the General Info component, the properties to be edited are:

In aircraft equipped with engine, to start or stop the engine, press

at the Bottom Function Bar, or from the Main Menu / Aircraft.

Another way of starting the engine is moving the throttle stick down and then up.

For arming the motors in some Multirotors, move the sticks to the position indicated by the moving green stick representation on the screen.

at the Function Bar to activate this function, or from the Main Menu / View

This function enhances the perception of the aircraft when it is too small in the screen.

When the aircraft is far and small, its attitude (i.e. orientation) is hardly recognised. The graphic enhancement consists of drawing a silhouette around the aircraft that is displayed when the aircraft size on the screen is too small. With this aid, even small changes in attitude can be distinguished.

Although this enhancement is of great help during the learning process, it should be deactivated to practise like in the real life. 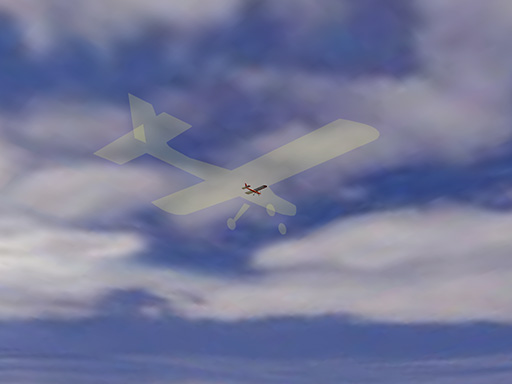 Enhanced Perception. The silhouette shows clearly the attitude of the aircraft.

Aircraft without landing gear must be hand-launched to start to fly. This function simulates hand launching.

How to change the launch parameters (velocity, angle, etc.)

The parameters for hand-launching (height, velocity, angle, etc.) can be edited for each aircraft in Main Menu / Aircraft / Edit Aircraft, from the properties of the General Information component.

Simulation of Fuel and Battery

The Fuel and Battery charge in AeroSIM-RC are consumed during flight.

The Centre of Gravity of the aircraft moves as the fuel is burnt.

If you want to fly with unlimited fuel and battery charge, check the box at Main Menu / Aircraft / Unlimited Fuel/Battery

As fuel is burnt, the Centre of Gravity of the aircraft moves (usually rearwards), changing the stability characteristics of the aircraft. To test the aircraft under empty fuel tank condition, check the box Main Menu / Aircraft / Empty Fuel Tank

The performance of the aircraft is the sum of the individual simulation of all of its components: Battery, Mass, Wings, Engine, Propeller, Wheels, Servos, Receiver, Remote Controller, etc.

A deep knowledge of aeronautics and RC is required to understand the effect of the many parameters that define an aircraft. As a starting point, an existing aircraft can be modified, and then saved with a different name from Top Menu / Aircraft / Save

In editor mode, the screen is divided into four areas: